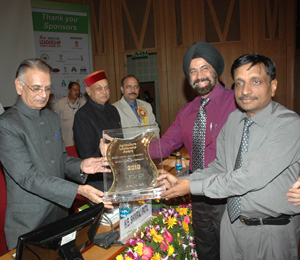 Escorts Limited has shown remarkable improvements in its performance over the last couple of quarters. While the industry recorded a substantial growth, Escorts outpaced the industry with a volume growth of 31%. Besides this, the company set a new benchmark by winning a Rs. 185 Cr order to supply over 1400 tractors to the Government of the United Republic of Tanzania thereby becoming a significant player in the African continent.

The company has also launched a series of initiatives to make the farmer more informed starting from high quality innovative products, services, and support for adopting improved production technologies. So be it the entry segment tractor (PT 429) to cater to the aspirations of small farmers and first time buyers, the 'XTRA Torque' series of tractors that are meant specially for the emerging trends of using 'rotary ' implements, to tractors fitted with 4 cylinder engines that are around 15% more fuel efficient than most other tractors in the market or India's first ever inverter tractor (a tractor fitted with an inbuilt inverter that can light up homes of farmers) - are all case in points where the farmer's 'cost of ownership', his overall operating economics, his needs for enhancing productivity & mitigating losses were supreme considerations for Escorts.

Mr. Rohtash Mal, Chief Executive Officer and Executive Director – Escorts Agri Machinery Group said, "In the midst of tough market conditions, our emphasis on increased efficiencies, cost compression and high quality products have made Escorts a winner in the marketplace and with our customers, the farmer. We believe the key to poverty alleviation and overall economic development of the country lies in rapid growth in agriculture. Increase in agriculture production will mainly come from growth in productivity which is possible when the farmer is informed and is aware about new equipments, high yielding seeds and new farming technologies. This, we believe is just the beginning as we move ahead full force to further accelerate our efforts to build a still stronger Escorts."