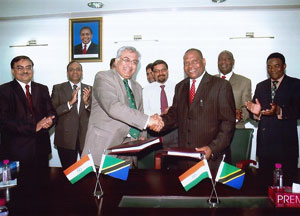 Escorts Limited, India's leading tractor manufacturer, today delivered the first batch of 100 tractors to the Government of the United Republic of Tanzania under the national "Food Sufficiency Program" aimed towards imparting a major thrust to farm mechanization and enhance agricultural productivity thereby making Tanzania a food surplus country. Escorts has been chosen to supply 2000 units of its premium range of powerful Farmtrac tractors to Tanzania over a period of 5 months.

Synonymous with reliability, the Farmtrac range of tractors are fuel efficient, have long serviceability and low maintenance cost. Keeping in tune with modern day requirements, the tractors have been designed for both agricultural and commercial applications and are compatible with a number of implements such as rotavator, cultivator, thrasher, reaper, baler and seed drills. The tractors meet the emission norms of the US and European markets.

Mr. Rohtash Mal, Chief Executive Officer and Executive Director – Escorts Agri Machinery Group said, "It is our privilege to be associated with the Government of Tanzania for a cause. With world class market mapped tractors and strong engineering capabilities, Escorts is well positioned to catalyze farm productivity in Africa."

"We strongly believe that farm mechanization holds the key to greater food security. Escorts powered the green revolution in India and we are privileged to support the national efforts to usher in the green revolution in Tanzania. Escorts has an ambitious immediate plan to open two offices in the African continent and set up a service and upkeep infrastructure in Africa." he further added.

Mr. Mal said, "Today, the Escorts brand is present in over 32 countries including 22 African countries. Our dominance in the African continent continues by the high volume of orders that we receive from the regions of Senegal, Sudan, Burkina Faso, South Africa, Madagascar and Tanzania. Our FARMTRAC range of offerings is a step towards improving agricultural practices thereby paving the way for prosperous yields."