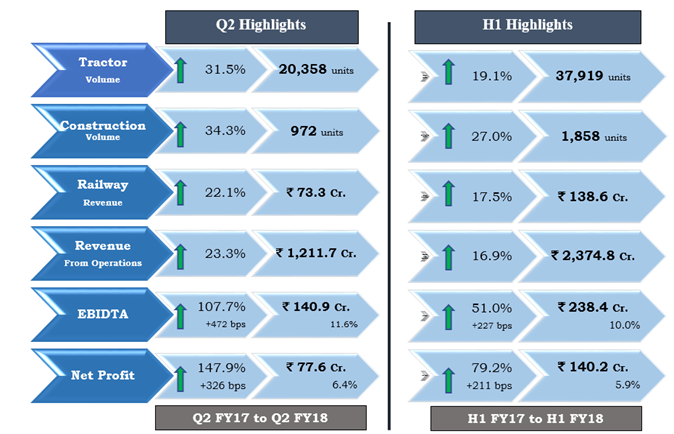 Speaking on the results, Chairman Mr. Rajan Nanda said, “Sustained economic focus and support to farm mechanisation, agro innovation and smart city infrastructure is a strong push to the industry and market demand. Our continued investments in technology, channel and product mix will continue to bring enhanced process efficiencies and business productivity.”

Says Mr. Nikhil Nanda, Managing Director, “Escorts today has a very competitive and innovative product portfolio powered by our frugal engineering and global best technology practices. Our recent launch of India’s first electric tractor concept is the testimony to our innovation and future readiness. With new products across businesses Escorts is equipped to tap the emerging opportunities across agriculture, infrastructure and railway segments both for domestic and global demand.”

Escorts Agri Machinery
Tractor sales were up by 31.5% at 20,358 units during the second quarter of the current fiscal. This was accompanied by significant improvement in EBIT margins which was up 438 bps at 13.7% as compared to 9.4% in the corresponding period.

Escorts Construction Equipment
Sales of construction equipment went up by 34.3% at 972 units as against 724 units in the corresponding quarter. EBIT margin turn positive at 0.5% as against negative 4.6% in last year same quarter.